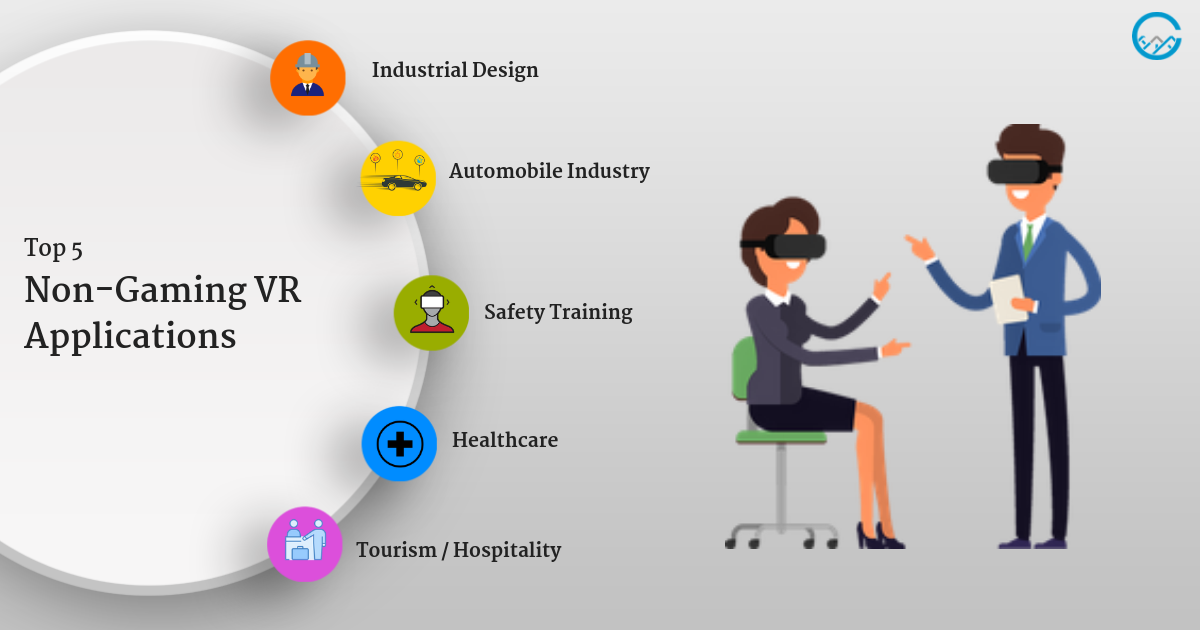 Virtual Gaming significantly enhances the gaming experience where the person finds himself experiencing a three-dimensional environment. This not only enhances the overall interaction and game-play but also provides the gaming company with a refreshing take on traditional games.

Understanding the concept may just get a little bit difficult and therefore we bring you an insight into the top 6 virtual reality non-gaming applications presently active in the market.

In the field of industrial engineering, premier companies like Ford and Siemens have been reported to make proficient use of virtual reality from a non-gaming perspective. For instance, Siemens has been making virtual copies for its gas turbines, which work as demo products. These VR copies allow the engineers to gain an insight into the functioning of the various elements within, including the 500 odd sensors on the turbines. All this is done without impacting the safety of the learners.

The data obtained from the virtual tests are re-evaluated using in-house software that takes into consideration several of the metrics that have been formulated. The entire process is referred to as predictive analysis. These findings play a critical role for the data scientists to develop VR solutions based on the outcome.

VR is also playing an integral role in the Automobile Industry. Apparently, BMW has been reported to be the first company that has brought a first-of-its-kind experience for the consumers with the launch of their “X2 Crossover SUV.”

The VR application allows the riders or potential buyers to gain an insight into driving the vehicle across a series of off-beat tracks like mud, desert, and such similar terrains. This VR application is also set to enhance user engagement since it will provide them with a finer insight into the operation of the vehicle and its integral elements as well.

It is expected that other premium companies running in the same map as that of BMW, would also acquire such technologies aided through VR for future reference and a better hold on the industry,

VR has also transfigured itself as an integral part of the healthcare industry. By virtue of virtual reality training, premier healthcare institutions like Florio have been integrating Medical VR into their prospects.

Medical VR with projects like Farmoo has the capability of reducing chronic pain, which is most commonly associated with the brain. In this case, the virtual reality therapy prevents the brain from processing pain in patients. This mode of treatment is significantly beneficial owing to the fact that it reduces the amount of discomfort for the patients during the recovery process; it also reduces the time needed for recovery and the costs associated with the entire treatment.

Karuna Labs has been the other premier healthcare institution that has been making use of medically induced BR treatment methodologies to treat chronic pain and reduce its overall effects in the patients.

Several Organizations including the US Armed Forces are making the use of VR to train and prepare their associates for real-life instances of emergencies. Several companies have been reported to train their employees with reference to safety protocols using VR. This prepares them for situations, which may arise in cases of emergencies.

Multinational companies also make the use of VR technology to prepare their associates with reference to emergency protocols, like vacating the premises in cases of fire or earthquakes. Virtual reality training has been reported to be one of the most effective and on-monotonous procedures for getting the people acquainted with a particular instance.

VR Solutions are widely used across the hospitality sector as well. A particular online presence referred to as Hotel-IER-Maldives beings forth a virtual reality map for the Maldives, which can be used by travelers to make themselves acquainted with the geography and premier attractions of the place ahead of their visit.

This method has turned out to be a great way of gaining the attention of tourists that are new to this location or probably traveling to this place for the first time. The 360-degrees VR map is expected to enhance destination and boost tourism prospects in a better way.

Amadeus is yet another company that is set out to revolutionize travel using a wide range of Virtual Reality Solutions. The company has been constructing a VR technology that would allow the person to virtually complete a tour ahead of its actual incurrence. The process would include visiting the destination virtually, booking light tickets, seating on the plane, making seat adjustments and all other travel integrals that aid to a premium experience.

These non-gaming applications of VR show the massive inroads the exciting technology has made in different sectors. Which one is your favorite VR application? Do write to us and let us know.

You can check out CHRP-INDIA. We have a broad range of expertise in the development of software and content for Virtual Reality across multiple industries.

We have deep domain experience in Industrial / Engineering industry, where VR can be leveraged to enhance the level of efficacy in training on Safety Awareness, Equipment Operations, Service / Troubleshooting, and Maintenance Training.

If you would like to know more about our AR/VR/MR Solutions (or) would like to book for a live demo to experience the virtual reality and talk to our experts, Call us on +91 40 6634 0090 / 91 (or) write to us vrdemo@chrp-india.com