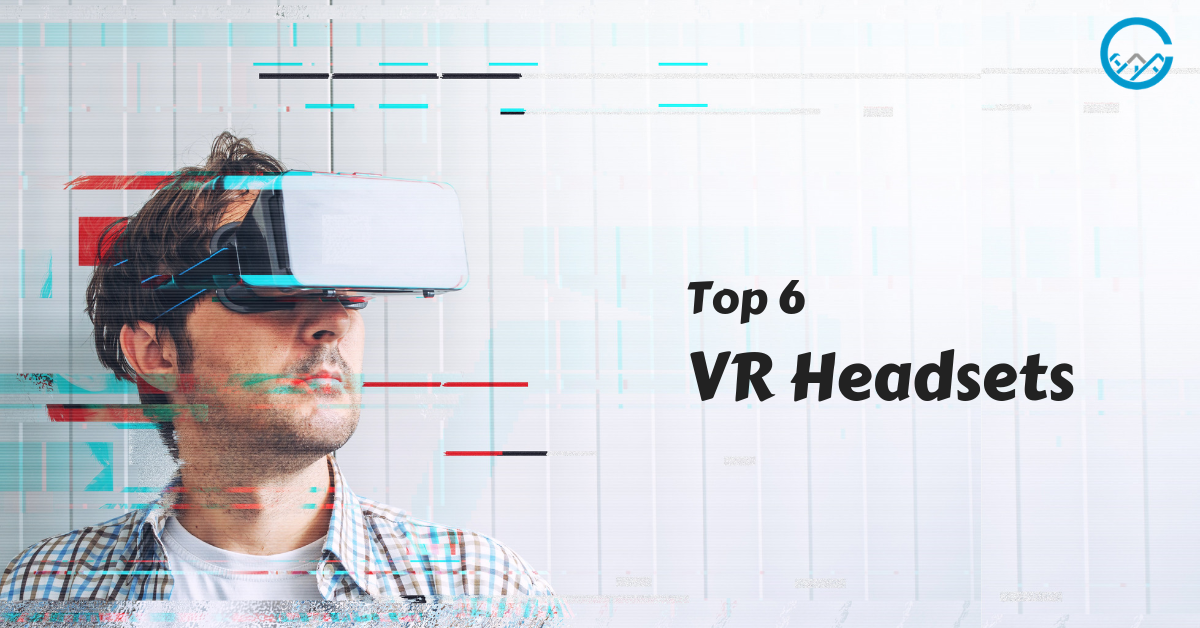 With the increasing demand for VR technologies and its interesting applications in different industries, the demand for compatible VR headsets to has increased substantially. Different platforms like Mac, Windows, Xbox or PlayStation4 need compatible headsets that can derive the right blend of immersive reality and user experience.

Today, we have a look at the pros and cons of the best VR headsets available on the market currently. This comparison will help you pick the most appropriate headset that offers total value for money for your specific use case. 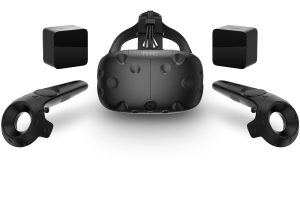 The HTC Vive VR headset is built in joint collaboration by HTC and Valve Corporation. One of the more interesting aspects of the headset is that it uses “room scale” tracking technology. This enables the user to move in 3D space and employ motion-tracked handheld controllers for fully immersive interaction with the environment.

– Vive Tracker – this is a motion tracking accessory designed to be attached to physical accessories and controllers. This ensures proper tracking via the Lighthouse system. Vive Trackers are equipped with a connector that can be employed to communicate with the accessory it is attached to.

– High impact controllers – The controllers for this headset look a bit heavier than the Oculus Rift. This is primarily because Vive uses a high-performance trackpad in place of analog. This facilitates much more precise motion detection than other headsets.

– Operating system – The Vive has steadily extended its OS compatibility, from just Windows to adding Linux and Mac OS later on.

– Cost-prohibitive– The headset’s retail pricing has gone down quite a bit since its launch. However, it is still a costly VR headset. If you need to get it bundled with additional accessories then the prices will shoot up, making it out of reach of smaller businesses.

We see that the Vive and the Rift are equally capable VR headsets. The gap has closed even further since HTC has reduced the bulkiness of its headset to be as lightweight and comfortable as the Rift. If you need to pick one out of the two then an important consideration would be the platform you are working on. Here too, they are well-aligned with both Oculus and SteamVR games. 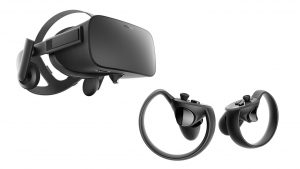 The Oculus Rift is a VR headset built and produced by Oculus VR, a division of Facebook Inc.

– Nimble controllers – Oculus headset comes with Oculus Touch controllers. These have multiple features like two face buttons and a grip button with a touchpad. It also features an analog stick and its official support is limited to Xbox One controller. However, we see that with some tweaks, it can be used on other controllers as well.

– Sharp Display – Rift is built with OLED technology and is split into two separate screens – one 1080×1200 display for each eye, thus doubling up the resolution to 2160×1200 pixels. Users can benefit from the responsive PenTile technology – the underlying technology to deliver a cleaner and sharper image.

We have seen some issues in compatibility of SteamVR and the Rift. While our developers have been able to make use of these two together, the balance, however, is unstable and might not work well with every game or app.

Out of all the headsets reviewed, the Oculus Rift does offer total value for money. This advantage is further accentuated by the two sensors along with motion controllers that come bundled with the system. It is also worth noting that you might need another sensor to enable truly immersive and accurate 360ᵒ motion tracking. Its compatibility issues with SteamVR goes against the headset. For this reason, gamers may pick the HTC Vive over the Rift. 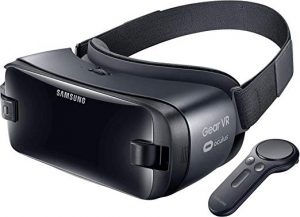 The Samsung Gear VR is an exciting mobile virtual reality headset built by Samsung Electronics, in collaboration with Oculus.

– Great Controls – The headset has a discreet touchpad along with Home and Back keys. It is equipped with a great controller that not only provides intuitive sync with motions but you can also control volume.

– Broader Compatibility – This headset will work smoothly with Galaxy phones from the same manufacturer (versions S6 and higher) and the Note range of Samsung phones (Note 5 and above). However, we see that it can work equally well with other phones that can appropriately fit the headset and run on Android 5.0 Lollipop or above.

– Support limited to Samsung phones – The primary negative aspect of the headset is that it works well only on Samsung smartphones. This is a key barrier that prevents widespread adoption of the VR headset and severely impacts the product’s fortunes in the long run.

Evidently, the VR headset is robustly built, delivers capable performance, and great content available on the Oculus library. However, its compatibility restriction with Samsung phones will be a significant drawback in a deeply competitive landscape. 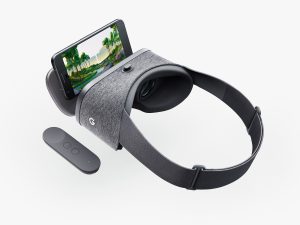 Daydream is Google’s own virtual reality (VR) platform. It offers deeper integration with the Android mobile operating system (considering that Android too is owned by Google). As compared to its first low-cost Cardboard solution (which was designed on compatible mobile apps), the Daydream is designed on the OS itself. All Android version N or 7.0 and above have Daydream built into the OS’ architecture.

– Full set of controls – The headset’s remote has an array of controls – from a touchpad, and Home button to volume change buttons, along with a nifty motion detection button.

– Compatibility – This headset is designed to work only on phones that satisfy these criteria.

Evidently, this narrows down the compatibility substantially.

– Restricted field of view: The VR headset’s narrow field of view (FOV) severely restricts the immersive experience to be head by using this headset. The FOV of about 90ᵒ is very limited.

– Poor content compatibility: To be honest, Google’s VR store doesn’t have much to offer when compared to other stores. The lack of content will also impact its adoption in the long run.

Two key aspects define the Daydream View perfectly – it delivers incredible performance as compared to the Cardboard in terms of better picture quality. It also is easier to operate than Cardboard. 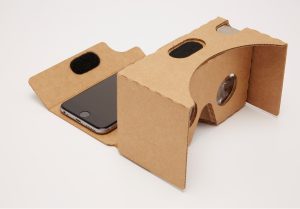 Google Cardboard is a virtual reality (VR) platform built by Google. The overall VR system makes use of a head mount that is connected to a smartphone.

– Cost-effective design – Google Cardboard delivers a simple design that is impactful enough to create the rich VR experience. It is one of the most affordable headsets available in the market today.

– Uncomfortable when worn – The cost-efficiency primarily comes at a material compromise. Hence you would not like the Cardboard material to be put on your face for long.

– Partial interaction – Due to its ‘magnetic’ button and the absence of a 100% functional controller, Cardboard is unable to play games that other VR headsets are able to render well.

The bottom-line is that Google Cardboard is quite imaginative. It transforms a very rudimentary concept to a great VR solution. The best part is that this compact design is able to perform surprisingly well, and can be a great starting point for VR enthusiasts. 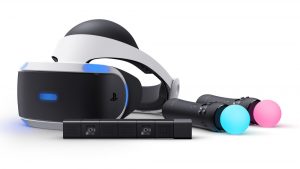 The PlayStation VR was known by the codename Project Morpheus initially at the time of development. Sony Interactive Entertainment has developed this headset.

– Total PS4 console compatibility –The PlayStation 4 Pro has been in the news because of is high-performance GPU. However, it is interesting to note that Sony’s flagship console is not the only one that is meant for VR applications. Both the original and the Slim variants of the PS4 too are 100% compatible with PSVR. But is remains true that the Pro will continue delivering a better graphical experience to users because of its advanced GPU capabilities.

– Precise motion tracking – Another exciting feature of the headset is the dual-lens PS Camera that renders better accuracy in motion tracking. This is driven primarily by the blue LED lights, that denote the coordinated and movement to the headset.

– Restricted compatibility on laptops/desktops – Sony is known to make any device compatible with only the system for which it was launched. The PSVR is no different. It can only work on PC with the help of third-party software, which is not a great solution.

In recent time, PlayStation VR is a single viable option available to those who require immersive VR experiences delivered on their gaming console. It is at par with Oculus and HTC when it boils down to overall performance. However, you need to be aware that it is a tough task to build support on your PC for PSVR.